Enjoying food is closely related to its preparation – at least for the chef.  Whether you are a type of person who passionately creates and tries out new and complex recipes or the type with more of a ‘just get it done’ general idea of cooking, the fact that preparation is to be efficient and timely is a constituent for all. If you have caught a few of pikes while on your forest getaway or just want to make a nice light chicken dinner, you are likely to have to fillet your future meal. The process of filleting requires skill, however, even the most skillful would have trouble filleting the meat in front of them if the knife was not right. As the process of slicing the meat from the bone can be quite delicate, fillet knife designers always try to create more efficient products so as to satisfy the needs of the consumers. In recent years electric fillet knives gained popularity due to the fact that they speed up the process significantly.  We have embarked on the quest to find the Best Electric Fillet Knife and we have narrowed our competition to the circle of five. After we present their features individually, we will declare the champion and discuss which are the most important characteristics of electric fillet knives. 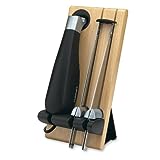 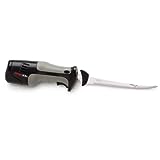 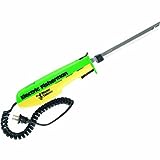 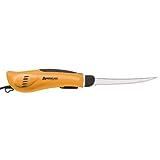 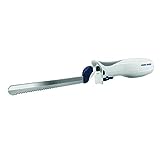 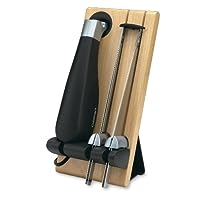 Cuisinart continues its creative endeavours to provide high quality culinary supplies throughout the years. The Cuisinart CEK-40 electric stainless steel knife represents its developers. Moreover, it is constituted so as to really meet customer’s needs. It’s constructing elements are the ergonomic handle (which is suitable for both right-handed and left-handed people) and two stainless steel blades – one of which is a bread blade while the other is a carving blade. The structure and the design of the blades are carefully combined so as to provide maximum performance in slicing and filleting meat, fish and vegetables. The powerful motor ensures timeliness of the food preparation and can be activated on and off by pressing the one-touch trigger. In addition to the wood block storage tray, the fillet knife comes with a safety lock system as well as an instruction manual which will provide necessary information for those who are new to electrical knifes. It has been developed under the license of North American Electrical Standards Association. And It can be ordered online without shipping fees or additional costs at a price of around forty dollars (depending on the distributer). 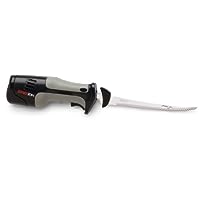 Rapala electric fillet knives have been immensely praised in the online community (as well as the off-line consumers). Their quality spans over all of the features which were carefully incorporate in order to provide maximum results with the least amount of fatigue or frustration. While structuring the handle of the fillet knife, the entrepreneurs focused on the balance of control and fatigue-blockers. The weight of the knife is reduced through the usage of a lithium ion battery (which is significantly lighter than a similar NiCad battery and also charges much faster while simultaneously lasting dazzling 100% longer). The battery has a low memory effect which ultimately results in a longer battery life. The motor can achieve prominent power and consistent speed while working quietly due to the advanced vented air flow which is incorporated in the design of the body. The structure cools down the vibrations while the knife is operating. The seven –inch chrome plated stainless blades are extremely precise allowing minimization of meat waste during the process of filleting. The fillet knife is available for online purchase for somewhat more than sixty dollars. From beginners to experienced meat carvers, this knife is adjustable to and suitable for anyone. 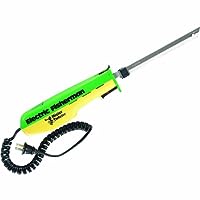 The legendary green and yellow Mister Twister Electric Knife experienced some updates and has been reintroduced to the market recently. Sometimes the old is so good that it needs only minor adjustment to the developments over the ages. It holds very little weight in itself enabling simple control over the process of carving. Moreover it has very sharp blades excellent for good angling positions while filleting. A safety lock prevents accidental start-ups and the housing provides a proper grounding platform for when the device is not being used. The motor plugs into over 120 V outlets and comes at the cost of somewhat more than fifteen dollars. In addition, a two year warranty s added to the purchase. It has been stated numerous times that the Mister Twister runs perfectly for unbelievable amount of time (sometimes up to twenty years) and is able to perform reasonable amount of precise carving. The profitability of this knife pops out even more when the price of the product is taken into consideration. If you are a beginner in filleting maybe you should choose a knife like this and let it become your long-term companion in culinary adventures. 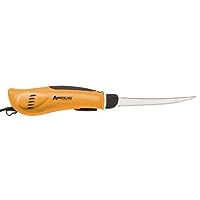 The Pro Electric Fillet Knife from the American Angler represents the newest and upgraded version of American Angler’s notable electric fillet knifes. The torque is doubled by the powerful motor system and consistency and flow of carving is ensured by a steady 110 V power stream. The knife is designed in such a manner that it does not become difficult operating it in longer intervals. The knife is orange in color and comes with a storage bag with air flow system incorporated in its design disabling accumulation of odors and corrosion. It is available for just under one hundred dollars with no shipping fees. The manufacturers claim that no other knife can work with such a steady yet considerable power as PRO Electric Fillet Knife can. However, as the price is still somewhat high (because it is a relatively new product on the market), it would be advisable to hold down with the purchase until the price settles down a bit. This kind of knife is suitable for filleting enthusiasts – mostly recreational fishermen who tend to use the help of electricity in their continuous struggle with preservation of as much meat they can from their precious catch. 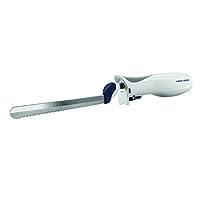 The Black & Decker placed a knife series on the market among which we found a great electric fillet knife. The knife is designed so as to perform effortlessly carving of thick and/or thin slices with perfect precision. The handle is modeled ergonomically and has a non-slip grip as well as a safety lock which disables accidental starts. The seven-inch stainless steel blade can be easily removed (which comes in extremely handy when the carving is done and the mess has to be taken care of). Moreover, as we have stated above, the blade is flush cut and provides clean and safe cuts. The knife was built under the North American Electrical Standards and can be purchased for less than twenty dollars and is available in the classy white color. Quality expectations and efficiency scores of the Black & Decker EK700 would suffice for any household’s needs regarding fillet knifes and the price is rightfully determined according to features and performance.

All of these knifes are specifically suitable for different customers. While the knives in the lower price range such as Black & Decker EK700 Nine-Inch Electric Carving Knife and the Mister Twister 120V Electric Knife are primarily for general usage in households and for beginners (because both do not have the technique of a skilled fillet carver) because it will suffice for its purpose. On the other hand, the American Angler PRO Electric Fillet Knife with 8-Inch Freshwater Blade is extremely professional and advanced as well as considerably expensive. Therefore it is suitable for either people who have skill in meat carving as well as continuous opportunities of usage (because, what is the point of owning an expensive product and not use it). We are left with two exceptional examples of electric fillet knives: Rapala Lithium Ion Cordless Electric Fillet Knife and Cuisinart CEK-40 Electric Fillet Knife. Both are designed extremely well and are somewhere in the golden middle among our circle of best electric fillet knives – considering the price. Therefore we would say one of the two would be our champion of this contest. Due to the general public acceptance we have decided on the Rapala electric fillet knife although it was a close call.

After we have decided on the winner, we should probably discuss what is it that actually makes a good electric fillet knife. As we have stated in the introduction, fillet carving is a highly skill intensive assignment which take time and patience. That is, if you do not have an electric knife and save time as well as a calm mind. A good electric knife blade which is intended for filleting should have a non-corrosive, strong and durable blade made from metal (preferably stainless steel). Moreover, the blade needs to allow tight angles in the process so as to ensure that most of the meat is secured for later usage. It should be up to seven-inches long (however, this depends on the size of the meat which is treated) while weight of the blade is decided upon individual preferences. On the other side, handle should be comfortable in order to provide control possibilities to whoever is filleting. Electric fillet knives allow ultimate speed and precision in filleting meat and are thus a good investment (and a good choice) in both commercial as well as professional culinary undertakings.